Now you know how to watch TV, choose programmes to record, and play them back, let’s look at some of the other extra features that the PVR provides, and which you may find yourself using quite often. There are also some even more advanced features, like connecting to your PC, which you won’t use as often, and which we’ll leave until later.

In this chapter, we’ll look at some of the features that your TF5800 provides to help you get the best from digital television, and at ways in which you can start to organise your channels and recordings in ways that are more convenient to you.

Make the most of digital TV

Digital television provides some extra features that you might not be used to on analogue broadcasts, and also new ways of doing some things you’re familiar with. We’re going to look at some of the most useful of the extra features on your PVR.

If you used subtitles on an analogue broadcast, you’re probably used to accessing them through the teletext service. With digital TV, they’re separate, and you can turn them on and off easily using the Opt button

on the remote control.

Press the Opt button, and a small menu box will appear on screen. Choose Subtitle Track, and press OK. Now you’ll see another menu, showing the subtitles available. English language subtitles will be labelled DVB[eng] and Welsh ones DBV[wel]; just highlight the subtitles you want, and press OK to turn subtitles on. 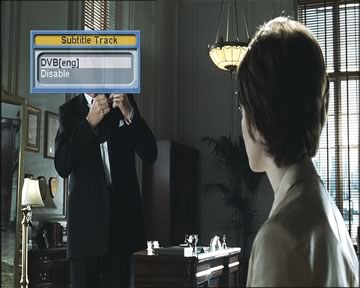 To turn subtitles off again, go to the same menu, and select Disable.

Digital Teletext is not available when subtitles are turned on.

If you have a hearing difficulty, and would like subtitles to be displayed automatically each time you switch your PVR on, press the Menu key, choose System Setting, then Language Setting and set 1st Subtitle Language to English or Welsh.

Digital television offers the option of having more than one soundtrack. So, for example, a foreign language film could be broadcast with both the original and the dubbed soundtrack, allowing viewers to choose which version to listen to. Often an alternative soundtrack is provided with an ‘audio description’ which is intended for blind viewers, to tell them what’s happening on screen.

You can switch between soundtracks by pressing the Opt key on the remote control, then selecting Sound Track. You’ll see the available soundtracks listed, such as ‘eng’ for English or ‘wel’ for Welsh, together with an Auto option. If you choose Auto, the PVR will automatically select the soundtrack that matches your language settings.

on the remote control. A small picture will appear in the top right section of the screen. Each time you press PiP move again, it will move one position clockwise around the screen,

At first, the picture will show a smaller version of the channel that you’re watching; you can change the channel in the small picture by pressing the White button on the remote control. 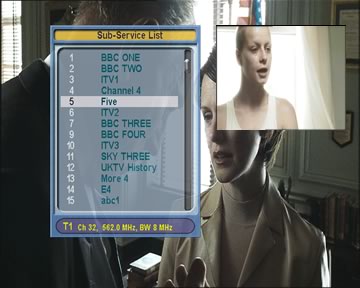 Just select a channel from the list that appears, and the small picture will change to that channel.

If you change channels in the normal way, the small PiP will stay on the channel it was previously set to, and the main picture will change; you’ll always hear the sound from the main picture, rather than the smaller one.

At any time, you can swap between the two pictures, making the main one smaller and the small one larger, by pressing the PiP Swap button.

If you are recording two programmes, the choice of channels available for the Picture in Picture may be limited, just as you can only view certain channels when recording two channels at the same time.