Before we look at some of the more advanced functions that can be used in conjunction with a PC, here are some more useful features for playback and viewing.

Your PVR can play back several recordings in a row, without intervention. You could use this to play back a series of short cartoons for children, or to provide constant entertainment at a party.

To play back a selection of files they must all be in the same folder in your archive. To select the files that you want to play, move to the first one and press the Red button. A number 1 will appear to the right of the name. When you select the next, it will be numbered two, and so on.

Press the OK button to start playback from the first file. At the end of that programme, the second one will be played, and then others in the sequence.

You can also use multiple playback to copy files, by pressing the Record button on the remote, instead of the OK button, after selecting the files with the Red key.

In addition to the fast playback we’ve already seen, you can watch programmes in slow motion too, as slow as 1/8th of the normal speed, whether you’re time-shifting live TV, or watching a recording.

during playback. The repeat symbol will be displayed in the information box. 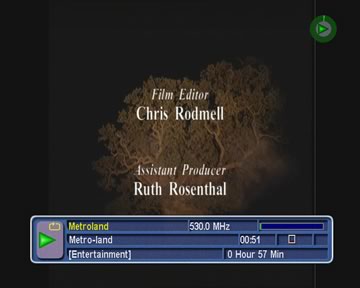 When the end of the recording is reached, playback will resume from the beginning.

You can also select a section of a programme to play repeatedly. During playback, press the Play button

to display the progress bar, and while it is on screen, press the White button. Now move along the progress bar until you find the other end of the section that you would like to repeat, which can be before or after the original point. Press the white key again.

Now, press Play to hide the progress bar, and press the White key to select the repeat mode. When you see a symbol like this in the information box

the PVR will play just the section of the programme that you have marked. If the current position is within that section, it will carry on playing until then end, otherwise it will return to the start of the marked section. Playback of the section will continue until you press Stop

, or until you change the repeat option by pressing the White button again.